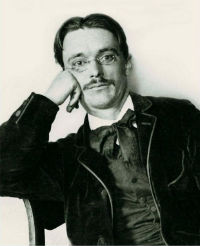 The intention of this website is to renew Rudolf Steiner's Philosophy Of Freedom according to Steiner's original impulse of freedom that motivated him to write the book.

"Many strive to conduct their lives in the direction of the principles I have suggested. To them I dedicate this book." Rudolf Steiner TPOF

The Individual Is The Center Of All Life
Rudolf Steiner's Philosophy Of Freedom is different than his later work in Anthroposophy. After all, the Anthroposophical Society wasn't formed until 20 years later. The Philosophy Of Freedom is a scientific—not a spiritualistic—worldview. It is not authoritarian or group dependent—it is about true individuality. It was published when Steiner publicly declared himself an Individualist Anarchist. "The human individual is the source of all morality and the center of all life” RS TPOF 9.12. Learn about the two periods of Steiner's life and the two paths he gave:   2 videos: Scholar Period and Occult Period - The Science Path And The Occult Path

Science Of Freedom
The Philosophy Of Freedom is the foundation of a new branch of science—the science of freedom. Its method is philosophic based on psychological observation. If this science of freedom does not receive the same intensive cultivation accorded other sciences, freedom will be irretrievably lost both by society and by the individual. “Without the solid foundation of a science of freedom, freedom would of necessity lead not to liberty, but to license." RS quote   video: Neuroscience Confirms Steiner By Discovering Why Human Freedom Is Possible

Peace Based On Freedom, Not Justice
"Freedom is the only word which has a ring of immediate truth today… If, instead of such slogans as peace founded on justice, or peace imposed by force, people would only speak of peace based on freedom, then this word would echo round the world and kindle in the hearts of all a sense of security." RS quote  "We are human in the fullest sense only in so far as we are free." RS TPOF  9.11    video: What Does Steiner Say Is Wrong With Democratic Socialism?

Ethical Individualism And A Libertarian Social And Political Life
Dr. Rudolf Steiner's science of freedom proves human evolution is the development of free thought and action. This provides a scientific basis for a libertarian social and political life. When Steiner debated the socialists they described him as delivering "libertarian tirades". "The purpose of The Philosophy Of Freedom is to lay the foundation of Ethical Individualism and of a social and political life."  RS quote

Jordan Peterson's Renewal Of The Philosophy Of Freedom
Dr. Steiner said The Philosophy Of Freedom should be updated in 100 years to speak the language of the time. This looked to be a hopeless task lacking anyone qualified. It was last revised in 1918 by Steiner.  But now, exactly 100 years later an unkown Canadian psychologist, Dr. Jordan Peterson, has roared upon the scene presenting the basics of Steiner's teachings in an understandable way backed up by the science of psychological and cognitive research. Steiner developed Ethical Individualism out of philosophy. Peterson has developed it out of the theory of evolution. "The same Ethical Individualism which I have developed on the basis of the preceding principles, might be equally well developed on the basis of the theory of evolution." RS TPOF 12.7
Jordan Peterson - The Philosophy Of Freedom
Jordan Peterson - The Social Justice Threat To Freedom