Common ethical order
The Moralist believes that a social community is possible only if the group is held together by a common ethical order. POF 9-10 What makes you a Christian, Jew, or Muslim is which book of ethical principles you selflessly submit to.

Betul Ulusoy is denied a job
Here is a story of how social organization is built around a common ethical principle. It begins when Betul, a Muslim law school graduate, was recently denied a trainee job at a law office in Berlin because she wore a headscarf. Without the addition of an ideal principle the incident would likely only be of interest to Betul, who is disappointed she didn't get the job. She posted a complaint on Facebook about being denied the job solely for the reason she chose to wear a headscarf. This incident then grew into a rally that unified many diverse groups. How did this happen? 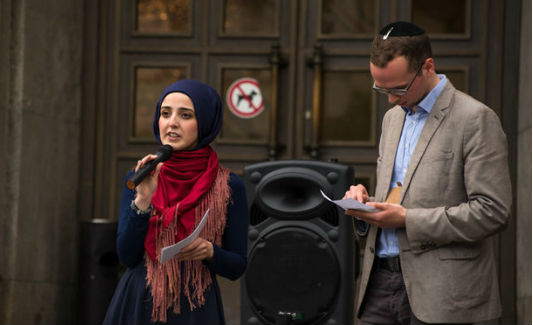 Common ethical principle
The situation drew the attention of others with the addition of an ethical principle. By universalizing the incident the interest in it broadens. The scarf becomes a “head covering” while Betul Ulusoy becomes a “religious person” who wears a head covering. This inspires a Muslim-Jewish organization to get involved whose members wear head coverings. They hold a rally and make it clear,

"We emphasize that we didn't demonstrate for Betül only, but for all with head coverings who are discriminated against based on their religious practices."

Further purifying the ethical principle by removing “religious” and “head covering” more people are inspired and join the rally. It becomes a social justice issue by adding the ideals of “democracy” and “equality”. The rally now gains support from a wide range of religious and secular organizations who say,

"We are working for a pluralistic democracy that respects all equally even if they are different."

The group has grown but is still held together by a single ethical principle of "social justice". Free individuals, at any one moment, are working to realize their own lofty ideals that they have chosen, whether it be saving the planet, world peace, fiscal responsibility, ethical business, raising an educated child etc. How is it possible to form a community of individuals if there is no common ethical principle to rally around?

Unity of the world of ideas
Pure ideas are not found isolated from each other, they connect to other ideas to form an ordered and systematic whole. The Moralist demands that others accept his ethical code because he does not understand that all universal ideals are joined together in a comprehensible unity in the world of ideas.

Harmony of intentions
An ethical individualist knows that a community of individuals can harmoniously work together “if we really draw from the Idea (unity of ideas) and do not obey external impulses (physical or spiritual). Then we cannot but meet in the same striving, the same intentions. An ethical misunderstanding, a clash, is impossible among ethically free human beings.” POF 9.10