Intuitive Thinking As A Spiritual Path

Region Of Mind
"no such finished, closed-off answer is provided here; rather, reference is made to a region of soul experience in which, through the soul’s inner activity, the question answers itself in a living way, always anew, whenever a human being needs it."

Sequence Of Thought
“For in the case of a book like this, the important thing is so to organize the thoughts it contains that they take effect."

Cosmic logic
"We have now depicted the inner aspect of the Cosmic Word, of Cosmic Thought. What we drew in a diagram as “cosmic logic” represents how the Spiritual Hierarchies of the cosmos think." "We may look upon this with holy awe: we are overhearing the thought-activity of the cosmos." H&Ct

Let concepts (Hierarchies) speak
"My Philosophy of Freedom presents the wide range of human standpoints, often masquerading under strange philosophical names, in a way that leaves the reader free of attachment to any particular approach and able to let the various concepts speak for themselves, as though each were a photograph of one and the same object taken from many different angles."

Use the cards as learning flashcards, freedom self-audit, empowered decision-making. Worldview cards for thinking about something from all sides, writing outline. 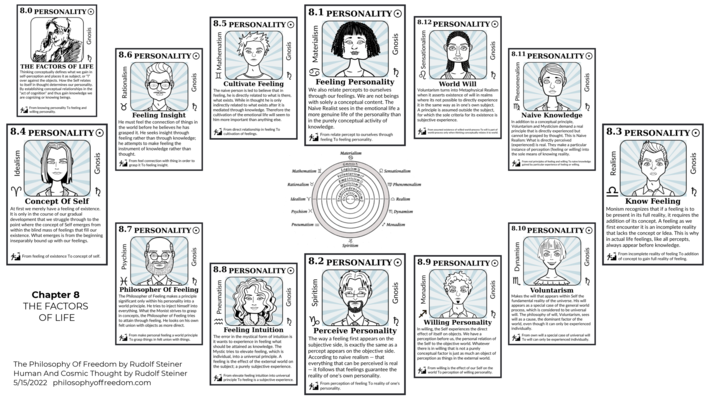 8.9 The Self, through thought, participates in the general life of the world. By means of thinking, in a purely conceptual way, it relates the percepts to itself, and itself to the percepts. In feeling, the Self experiences the direct effect of objects on itself as subject. In willing, the opposite is the case. In willing, too, we have a perception before us, namely, the personal relation of the Self to the objective world.