What kind of group to support life learning of TPOF? Keep repeating chapter study groups or something else? Eventually lead study groups. (teaching is best learning) 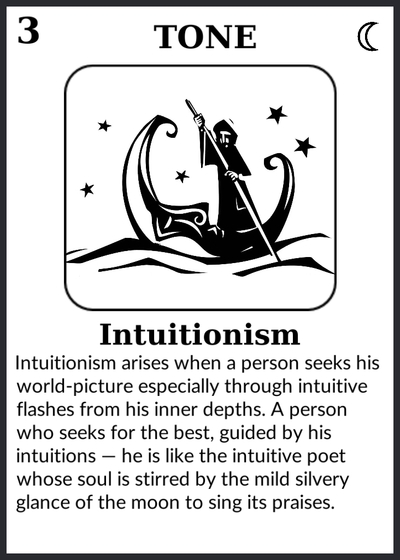 Graphic novel story 'intuitive thinking as a spiritual path'.
Naturalism: The character is living life at a certain level of existence.
Theism: The antagonist (science) raises an issue.
Intuitionism: The character has an intuitive experience after thinking about thinking.

Naturalism:Next topic the character is living at the new level after applying intuition.
Theism: The atagonist raises an issue.
Intuitionism: The character has another intuition and the steps to freedom continue.

12.1 Concrete Idea
MATERIALISM stick to what they know according to their nature.
Materialism in 12.1 find existing concrete ideas

[2] The moment an impulse to action is present in universal conceptual form (for example, You should do good to your fellow human beings! You should live in ways that ensure good health!)...

UNFREE
...then in each particular case the concrete idea of the action (the relation of the concept to a perceptual content) must first be found.

FREE
For a free spirit, who has no role model and no fear of punishment, etc., this translation of the concept into an idea is always necessary.

Spiritism - How does this relate to spiritual activity?

12.2 Moral Imagination
SPIRITISM discover what is underlying the thing by their own inner activity.
Spiritism in 12.2 inner spiritual activity (thinking) of moral imagination.

FREE
In fact, only people with moral imagination are actually morally productive.

UNFREE
Those who merely preach morality, people who merely devise codes of ethics without the ability to condense them into concrete ideas—are morally unproductive.

UNFREE
They are like the critic who can explain very competently what a work of art should be like, but is himself incapable of achieving the slightest artistic production.

How does this relate to the 'real' world?

[4] In order to realize the ideas produced by moral imagination, one must set to work in a specific field of percepts. Human deeds do not create percepts; but transforms already existing ones by giving them a new form. To be able to transform a specific perceptual object or group of objects in accordance with a moral idea, it is necessary to understand their underlying laws (the way it has worked until now, which one intends to change or give a new direction).

One must also find the method by which it is possible to transform the existing laws into new ones. This part of effective moral activity depends on a knowledge of the particular world of phenomena with which one is dealing. This knowledge will be found in a branch of general scientific knowledge. So in addition to the faculty for having moral concepts (moral intuition) and moral imagination, moral deeds presuppose the ability to transform the perceptible world without violating the natural laws by which things are connected. This ability is moral technique. It can be learned in the same way that science in general can be learned.

FREE
In general, people are better able to find concepts for the existing world than to productively originate out of their imagination future deeds, not yet in existence.

UNFREE
Therefore, someone without moral imagination may well receive moral ideas from others and skillfully work them into reality. The reverse can also occur, where someone with moral imagination lacks technical skill and must rely on the service of others to carry out their ideas.
[5] Insofar as knowledge of the objects within our field of activity is necessary for acting morally, our action will depend on this kind of knowledge. What we need to know here are natural laws. These belong to the Natural Sciences, not to Ethics.

How does this relate to the ideas that give life meaning?

Naturalism: act of moral imagination
Theism: operating cause in the world
Intuitionism: science of ethical standards

12.4 Science Of Morality
IDEALISM there is a realm of ideas within the world process, progressive tendency.
Idealism in 12.4 produce and study moral ideas

[6] Moral imagination and the faculty for having moral concepts can become a subject of knowledge only after they have first been put to use by the individual.

By then, they no longer regulate life; for they have already put it in order. They must now be regarded as operating causes, and be explained in the same way as any other causes (they are purposes only for the subject).

The study of them is a Natural Science of moral ideas.
[7] It is not possible to have ethics as a Normative Science in the form of a science of standards, over and above this science.

Mathematism - How does this relate to a set of standards?

12.5 Create Moral Rules
MATHEMATISM world is mechanical apparatus, to compute and calculate.
Mathematism in 12.5 derive and apply moral rules like rules of diet.

UNFREE
[8] Some people have tried to retain the normative character of moral laws— at least, to the extent that ethics is being understood in the same way as dietetics. Dietetics derives general rules from the organism’s requirements for life, in order then, on the basis of these laws, to give detailed directions for influencing the body (Paulson, System of Ethics).
This is a false comparison, because our moral life is not comparable to the life of the organism. The organism functions without our doing anything about it. We find its laws already present in the world, so we can seek the laws and apply those that we discover.

FREE
Moral laws, on the other hand, do not exist until we create them. We cannot apply them until they have been created.

UNFREE
The error is due to the fact that the content of moral laws is not newly created at every moment, but is handed down. The moral laws inherited from our ancestors appear to be given, just like the natural laws of the organism.

FREE
As a moral being I am an individual and have my own laws. 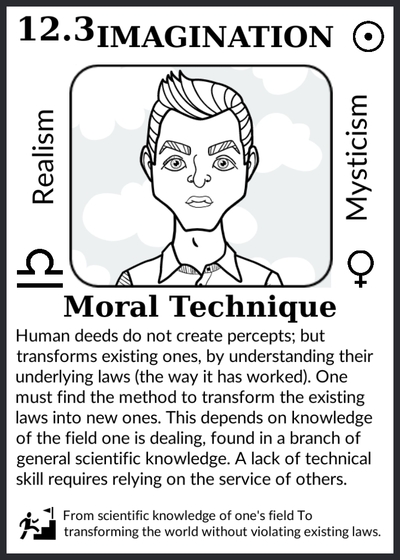 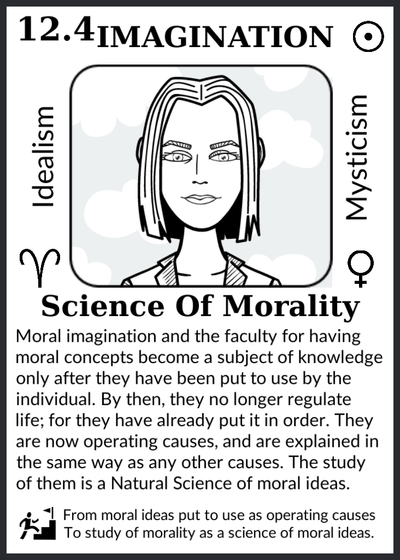 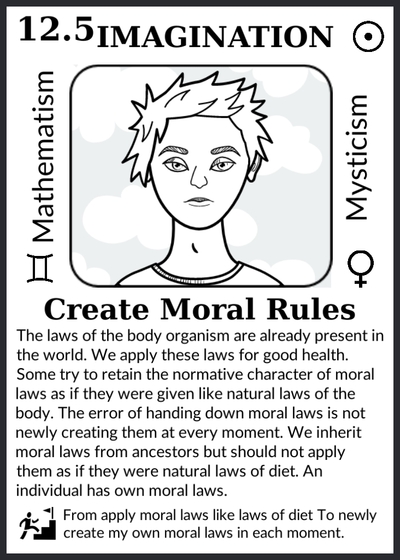 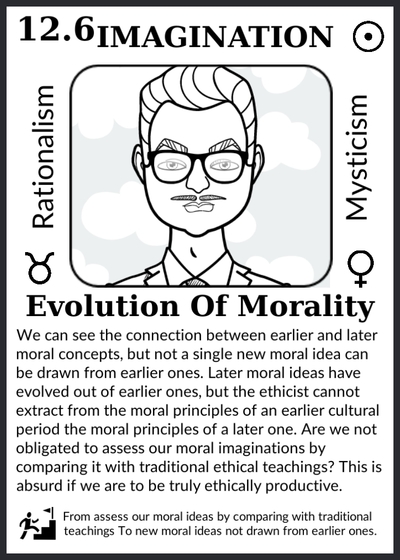 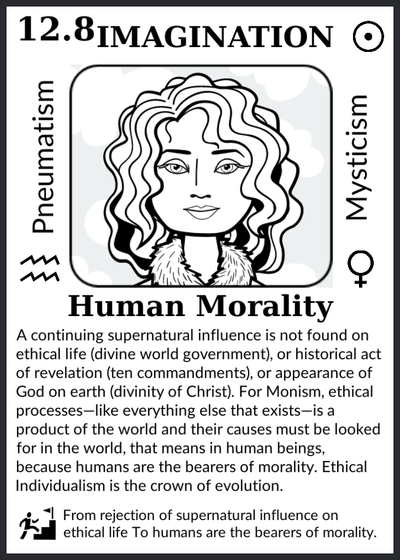 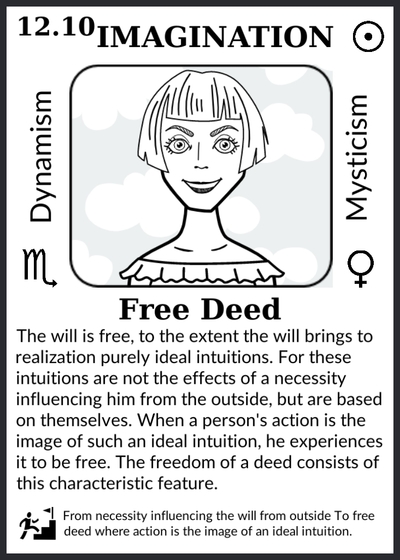 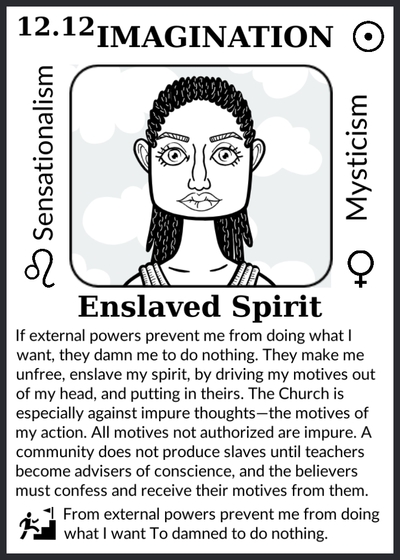