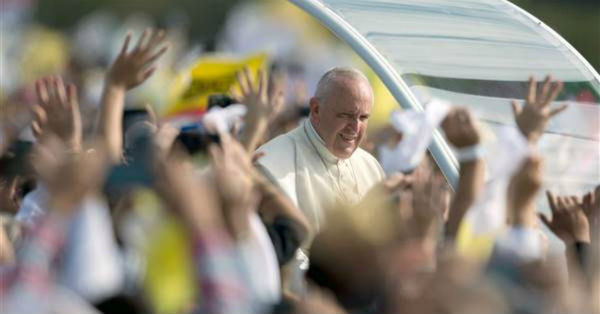 Pope assails capitalist greed telling youth to rise up and “make a mess”
Pope Francis has called for a youth uprising against global capitalism. Last Sunday the Pope gave a rousing speech during which he told a crowd of young people in Paraguay that it is their time to "go make a mess." He assailed the prevailing economic system as the "dung of the devil," saying that the systemic "greed for money" is a "subtle dictatorship" that "condemns and enslaves men and women."

He spoke of “the necessity of fighting for the right to lead a dignified life.” "We don't want young weaklings. We do not want young people who tire quickly, who live life worn out with faces of boredom. We want youths with hope and strength," Francis told the crowd.

Self-absorbed spiritualists should take action
On other occasions, the Pope has urged priests to leave “the stale air of closed rooms” and has characterized traditional Catholics as “self-absorbed.” "I want the Church to go out into the streets,” Pope Francis told a cheering crowd gathered for World Youth Day in Rio de Janeiro in July 2013.

Is Jorge Mario Bergoglio an non-violent "Anarchist” at heart, clothed in popes clothing? In an interview later the Pope continued, perhaps disappointingly, “It is not that the Church has an option for the anarchic way.”

Individualist anarchist philosophy was found amongst artists, intellectuals and the well-read, urban middle classes in general. As such Murray Bookchin describes a lot of individualist anarchists as people who expressed their opposition in uniquely personal forms, especially in fiery tracts, outrageous behavior, and aberrant lifestyles in the cultural ghettos of fin de siecle New York, Paris, and London. As a credo, individualist anarchism remained largely a bohemian lifestyle, most conspicuous in its demands for sexual freedom ('free love') and enamored of innovations in art, behavior, and clothing. wiki

“The State hates the individual. The State says: I can only use a person who behaves thus and thus. Whoever is different, I shall force him to become the way I want.”

The Individualist Anarchist knows that people should be trusted to find their own direction, should be given “free way”. The way is then cleared “for the most independent people by doing away with all force and authority”.