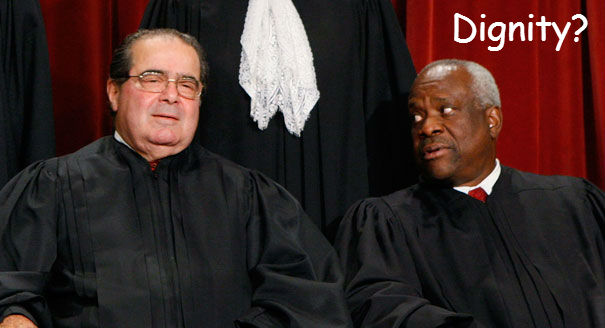 But Justice Clarence Thomas, one of four dissenting judges who each wrote separate opinions in the case, took issue with the majority's use of the word "dignity."

"The majority goes to great lengths to assert that its decision will advance the 'dignity' of same-sex couples," Thomas wrote. "The flaw in that reasoning, of course, is that the Constitution contains no 'dignity' Clause, and even if it did, the government would be incapable of bestowing dignity. Human dignity has long been understood in this country to be innate."

Dignity Is An Ideal That Is Applied
As an ethical individualist I agree that the government cannot bestow “inherent” dignity and it cannot take it away. The inherent worth and dignity of every person is an ideal principle that we can affirm. But for an ethical principle to matter it needs to be applied to life. When an ethical principle lives in the core of our being it becomes a call to action to apply it. We become empowered and motivated to support and protect the dignity of our self and of others. A proper reading of the U.S. Constitution would suggest that it is the state’s obligation to protect and affirm the dignity of every citizen.

Attitude Toward Others
Human dignity is expressed daily in the attitude we have for others. This is why we are outraged when those on top demonize poor people with less social advantage by unjustly calling them “parasites”, “spongers”, and “loafers”.

"...the attitude, the state of the soul, with which a human being, experiencing himself or herself amidst esteemed fellow human beings, can best do justice to human dignity." POF 9.10 (1918 addition)

"We are convinced that in each of us, if only we probe deep enough into the very heart of our being, there dwells something noble, something worthy of development." POF 0.0