Social justice activists have pushed Rudolf Steiner and the free spirit out of Waldorf education. They are now SJW Schools where your child will be indoctrinated into a worldview of racism and white privilege. This becomes clear when you investigate the underlying ideology of the social justice movement (see Culture War videos). Social justice ideology is a Materialistic worldview that shifts the focus away from individual responsibility and human development to blaming others and the external world (systemic racism) for all that is wrong with people and the world. It stands in direct opposition to Rudolf Steiner's Philosophy Of Freedom and its path to free individuality. (see The Philosophy Of Freedom Chapter 14) 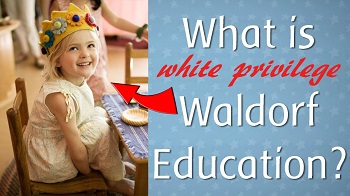 "Freedom is the only word which has a ring of immediate truth today… If, instead of such slogans as peace founded on justice, or peace imposed by force, people would only speak of peace based on freedom, then this word would echo round the world and kindle in the hearts of all a sense of security." Rudolf Steiner

This reply was deleted.
E-mail me when people leave their comments –
Follow

Rudolf Steiner: The Fundamental Sovereignty Of The Individual

Jordan Peterson and Rudolf Steiner agree that the path forward that will do the most good and protect the world from tyrannical collectivism is to strengthen the sovereignty of the individual. This is the fundamental difference between social justice ideology and freedom philosophy. Social justice ideology favors group identity and collectivism over valuing and respecting the sovereignty of the individual. The text for the video is the first paragraph of the original 1894 unedited Philosophy Of…

RUDOLF STEINER: How To Become A Free Individuality

Please send this link to those who may fall prey to social justice ideology. The Western values of freedom and individualism are being questioned today by the social justice movement. Is free individuality even possible or is our thinking and behavior culturally determined by our groups (race, tribe, nation, family, male or female, state, church etc.)? Are social justice activists right that our thinking and behavior has been culturally determined for us all to be racists or do they lack a…

If  you are a student, parent or educator concerned about the take over of Rudolf Steiner's Waldorf Education by Social Justice activists contact Tom. I am looking for comments, stories and concerns about what is happening to Waldorf Education. You may remain anonymous but your stories must be told. The Marist political  ideology of the social justice movement has no place in Waldorf education as it stands in direct opposition to Rudolf Steiner's principles of freedom.  WALDORF INSIDER REPORTS:…